Wheat and gluten sensitivities may seem like modern, hot button topics, but guess what? They aren’t actually new. Wheat and gluten reactions have been recorded as far back as ancient Rome when slaves who handled several tasks in bread baking were known to develop respiratory illnesses in association with wheat flour. What is new (or newer), however, is the form that these wheat and gluten related conditions take on today. Gluten-related illnesses have been on the rise in the United States for several decades, tracking almost directly with the rise of modern agricultural and food processing practices.

While ancient Roman slaves suffered primarily from respiratory complaints, now called baker’s allergy, modern day, gluten-containing foods and ingredients lead to a wide variety of conditions, most notably systemic inflammatory illnesses, autoimmune diseases, and celiac disease. If not recognized early enough or if dietary changes and other interventions are not put in place, the results may range from mild in some patients to quite severe, even life-threatening in others.

Celiac disease and autoimmunity are on the rise

Celiac disease is among the most severe forms of gluten-related illnesses, and has been well documented as far back as World War II. However, in the mid-1940s, only 1 in 700 people was at risk of having celiac disease. At present, that number is 1 in 100. Celiac disease not only leaves patients at risk for autoimmune disease, but it may cause breakdown of the lining of the intestinal tract leading to inflammation, malabsorption of nutrients, and leakage of proteins and toxins into the blood stream.

The role of the US food manufacturing industry

As mentioned in THIS post, the US food manufacturing industry has worked hard to find ways to make food cheaper and faster. Unfortunately, this has resulted in stripping naturally occurring nutrients out of foods and replacing them with artificial versions of those nutrients in addition to chemicals, preservatives, and more. Throughout this process, the composition of wheat, and in particular gluten, has changed dramatically.

The wheat making up the breads, cereals, pastas, and numerous other products on grocery store shelves today is not the same wheat that your parents, grandparents, or great grandparents ate. And, it is changing every day.

As of this writing, genetically modified (GMO) gluten is not allowed in food products, but it likely will be in the near future (GMO potatoes were just given the green-light for your grocery store shelves!). Although GMO gluten isn’t allowed in food products, the gluten that is allowed is dramatically different from the wheat of just a few decades ago. The gluten protein and other constituents of wheat have been bastardized through processes such as hybridization, deamidation, and so on.

Genetic modification — Inserting or deleting genes to turn certain traits on or off; may include inserting genes from other species, even genes from insects or environmental toxins.

Hybridization — taking two strains of a species and combining them to create a new strain (in this case, a new strain of wheat); the process of breeding a species to express a desired trait without actually removing or inserting genes.

Deamidation — using enzymes or acids to treat a product (in our case, gluten and its subparticle, gliadin) in the food manufacturing industry.

Gliadins — alcohol soluble particles that change the properties of a food when added to it.

What happens to gluten in food processing?

The US food industry has found a way to take gliadins and strip them of their natural properties through deamidation, making them water-soluble and thus able to be used in a much wider array of foods than ever before. Deamidation, however, makes gliadin extremely immunereactive — people who might not have reacted to gliadin in its natural state are now much more likely to have an immune response to it than ever before. Unfortunately, hybridization of wheat appears to have had similar results, causing reactivity not only in the intestinal tract, but also in relation to the brain and nervous system.

What does this mean for you?

Immune responses to gluten in the diet, and to closely associated particles including gliadins, glutenins, numerous enzymes, serine proteinase inhibitors, agglutinin, and more, is becoming more and more common. Every “advance” in agribusiness and food manufacturing seems to also correlate to increasing rates of gluten and wheat related illnesses. And, sadly, there are numerous loopholes to food labeling. Just because a food is listed as “gluten-free” doesn’t mean that it truly is 100% so.

Chronic inflammation, impaired intestinal permeability (including “leaky gut”), and autoimmunity in relation to gluten and wheat products are fast becoming the new normal. In many patients, large, undigested (or even undigestable) proteins may cross through the intestinal barrier, or a leaky gut, before they are able to be broken down for use by the body. The result is nutritional deficiencies which, if left untreated, may become severe. Over time, overall health begins to erode, inflammation develops, and an autoimmune response may not only be triggered, but may rage throughout the body, uncontrolled. 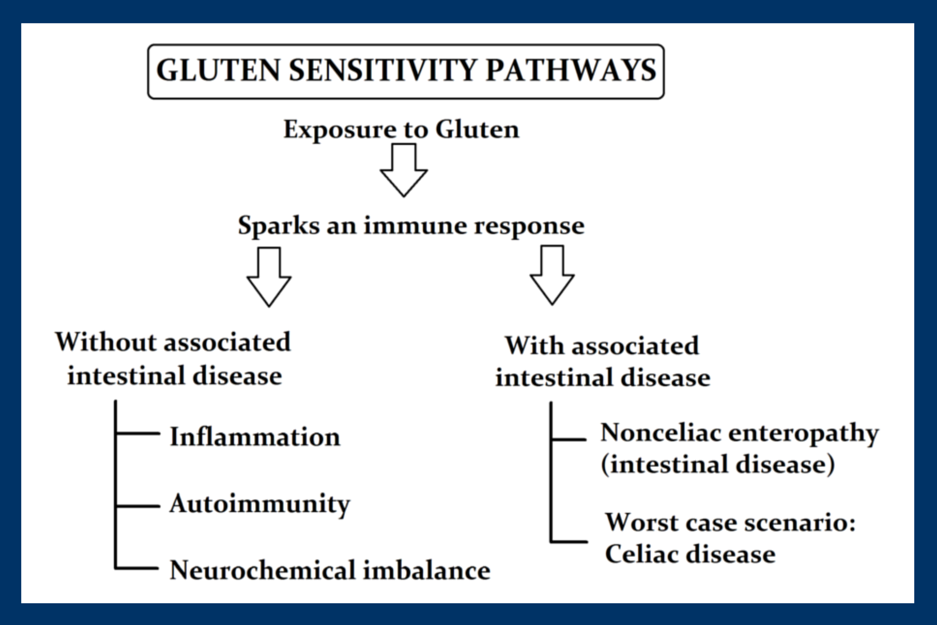 Wheat and gluten-related symptoms may differ from person to person due overall diet, lifestyle factors, and genetic predisposition. Just a few common symptoms include:

Ultimately, as the food manufacturing industry continues to find ways to make food faster, cheaper, and more resistant to droughts and insects, as whole we risk ever increasing gluten-sensitivity and related illnesses. For many, the answer is in simply eliminating gluten and all gluten-related products or ingredients from the diet. For others, there may be underlying or concomitant health issues that also need to be addressed.

To find out of gluten may be at the root of your chronic health conditions or if it is adding to other pre-existing concerns, please call Functional Longevity Institute today at (916)550-0567 to schedule an appointment with Dr. Andrea Rosario or Dr. Lisa Medel. We see patients in-office, over the telephone, and via Skype. Nutrigenomics , or the study of how diet impacts health and genetic expression, is a cornerstone of functional medicine and one of our specialties. We look forward to seeing you soon.